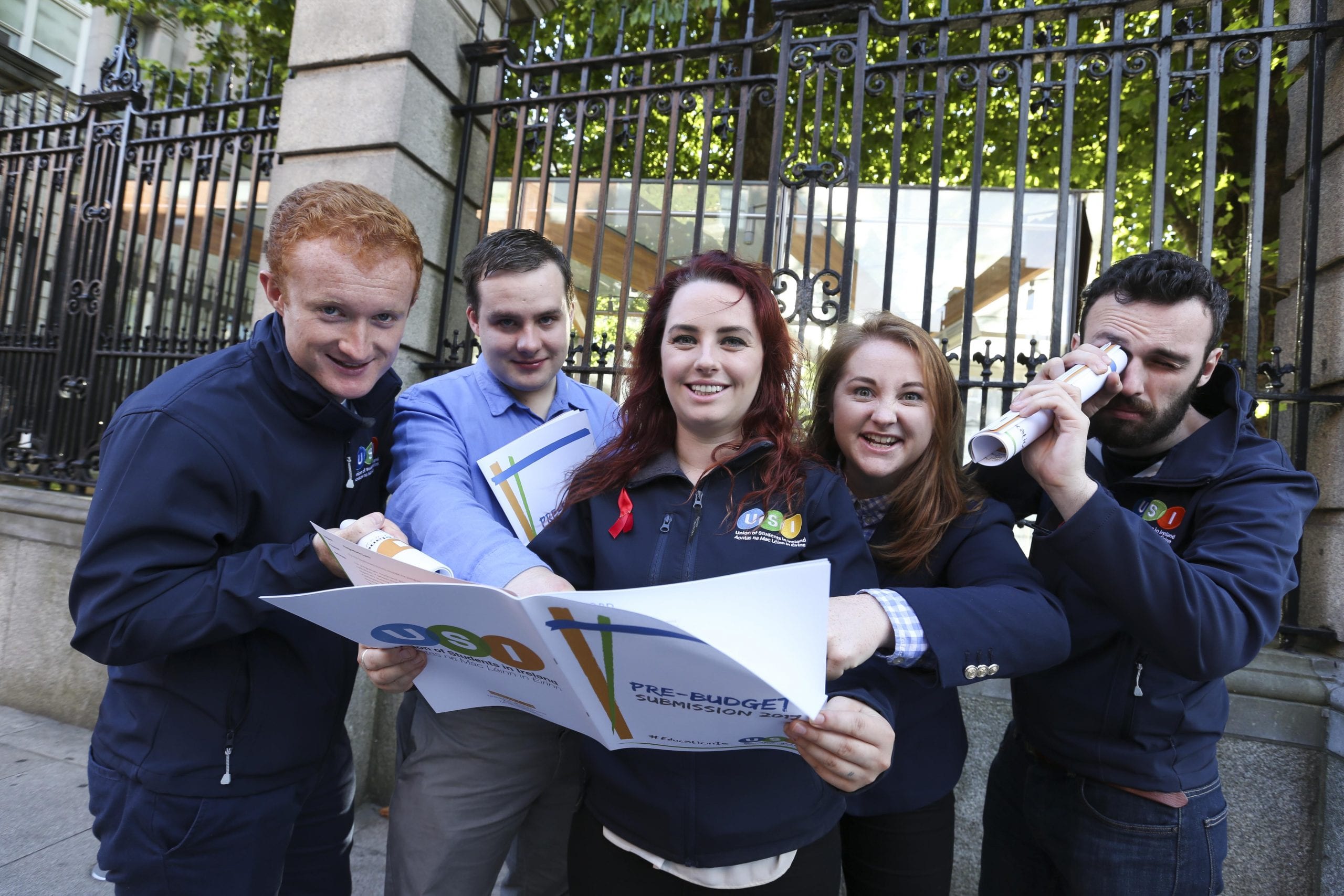 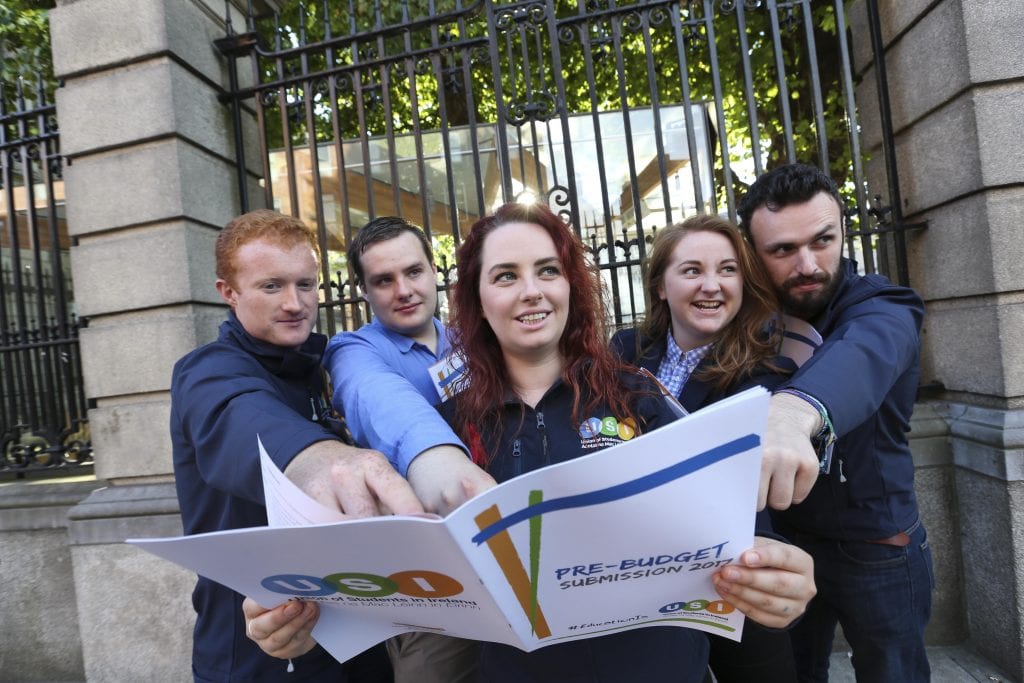 The Union of Students in Ireland launched its Pre-Budget Submission outside Leinster House at 8:30am on Tuesday the 6th September. The proposals in the submission include a €500 minimum reduction in fees; a €140 million investment in higher education; reinstating postgraduate grants; and a €5million investment in third-level mental health counselling. USI President, Annie Hoey, said the government needs to match talk of economic recovery with financial investment in third-level education.

You can download the submission here: USI Pre-Budget Submission 2017

USI VP for the Border, Midlands and Western region, Michael Kerrigan, hand-delivered a copy of the pre-budget submission  with students from GMIT Castlebar campus, to Taoiseach Enda Kenny’s offices in Tucker Street, Castlebar; and USI VP for the Southern region, Niamh Murtagh, hand-delivered a copy at 9am to Micheál Martin’s offices in Turner’s Cross, Cork.

“The third-level sector has struggled to perform during many years of austerity.” Annie Hoey, USI President, said. “USI believes that the sector should be praised for its efforts to deliver quality education during a sustained period of under-investment and uncertainty. However, what is necessary as a response to crisis is not sustainable as a long-term model. It’s time to match talk of economic recovery with strategic investment in vital public services such as education.” 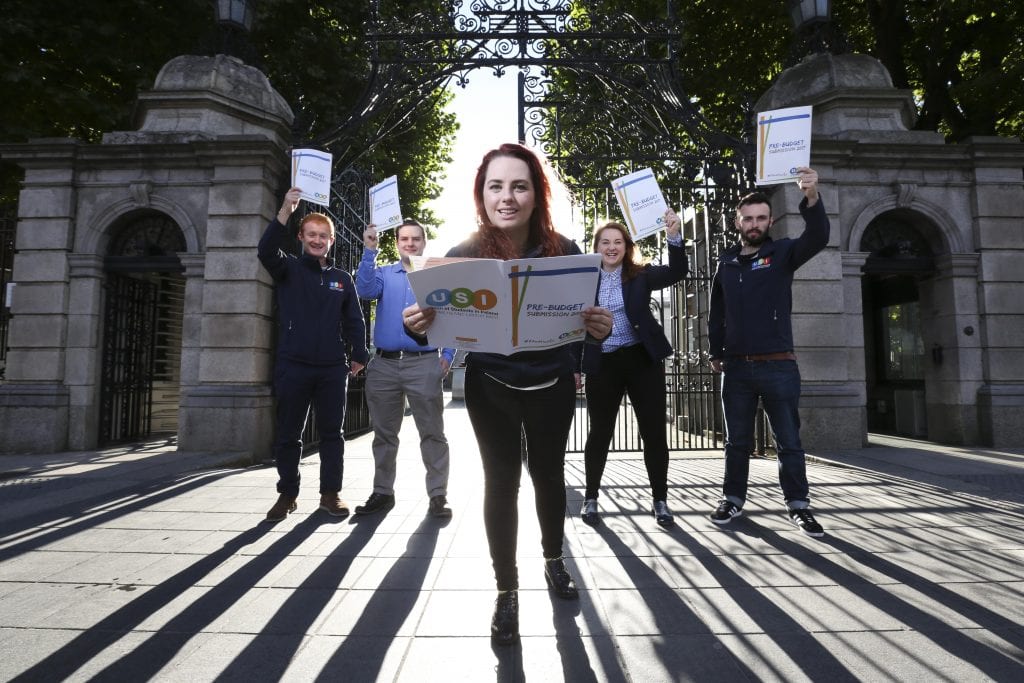 The recently-published Investing in National Ambition report into the future funding of higher education has identified an “urgent” need for €600m additional investment over the next five years, as well as €100m extra in student supports. USI is calling on the government to immediately commence that additional investment on a phased basis so as to ensure quality, participation, and support services can be improved.

USI research shows 58% of students use extreme budgeting tactics, such as missing meals, in order to meet the costs of education. Further research into student dropout shows that financial issues are a significant trigger for withdrawal from attending third-level. The highest available rate of maintenance grant, available only in special circumstances and at a non-adjacent rate, contributes to a maximum of 54% of the annual cost of participation in third-level.

The reinstatement of the postgraduate grants will cost €53 million. The postgraduate maintenance grant was abolished in Budget 2012 and replaced by a postgraduate contribution fee of between €2,000 and €6,270 depending on income with thresholds of €31,500 and €22,703 respectively.

USI said a better educated population will lead to a stronger, more skilled workforce capable of earning higher incomes and paying a higher tax bracket – therefore, paying more back to the system long-term.

“Abolishing the post-graduate grants has created a two-tier system where students from lower socio-economic backgrounds cannot progress past an undergraduate level.” Hoey said. “Reinstating the post-grad grants will keep things on a level playing field.”

USI’s proposal for the Government to reverse cuts to student grants made in the 2011 Budget and the 2012 Budget will cost €12.3 million. The minimum reduction of the student contribution charge by €500 will cost €34 million per €500. USI said a reduction in the student contribution charge, or registration fee, is absolutely vital to opening the opportunity of third level education to those from lower socioeconomic backgrounds and to increase social mobility in Ireland, in line with the recovery.

The proposal for the government to secure ring-fence funding of €37.5m annually and to put an emphasis on local 24/7 crisis intervention services is something USI said is crucial to improve the under-resourced, under-funded mental health services in Ireland, and to create real support for young people to improve their well being and strengthen their mental health. In the pre-budget submission USI also proposes that the government invests in third-level mental health counselling and supports which will cost €5 million per annum.

“Hundreds of thousands of students and their families are extremely concerned about the ever-rising cost of third-level education.” USI President, Annie Hoey, said. “Dramatic increases in accommodation costs, a shortage in appropriate part-time work, and the burden of €3,000 fees contribute to a burdensome annual cost of around €11,000 to attend third-level, according to Campus Life. Against a backdrop of drastically reduced family incomes, this arrangement is unsustainable in and of itself. Worse, there has been no increase in the sufficiency of core student supports while costs have risen. Students and families are actively and demonstrably struggling to make ends meet.

“These concerns are reflected in our recommendations for Budget 2017. The affordability and quality of third-level education are topical and urgent concerns; if allowed to continue, the current system will ensure a two-tier and underperforming system. This serves no one’s interest.” 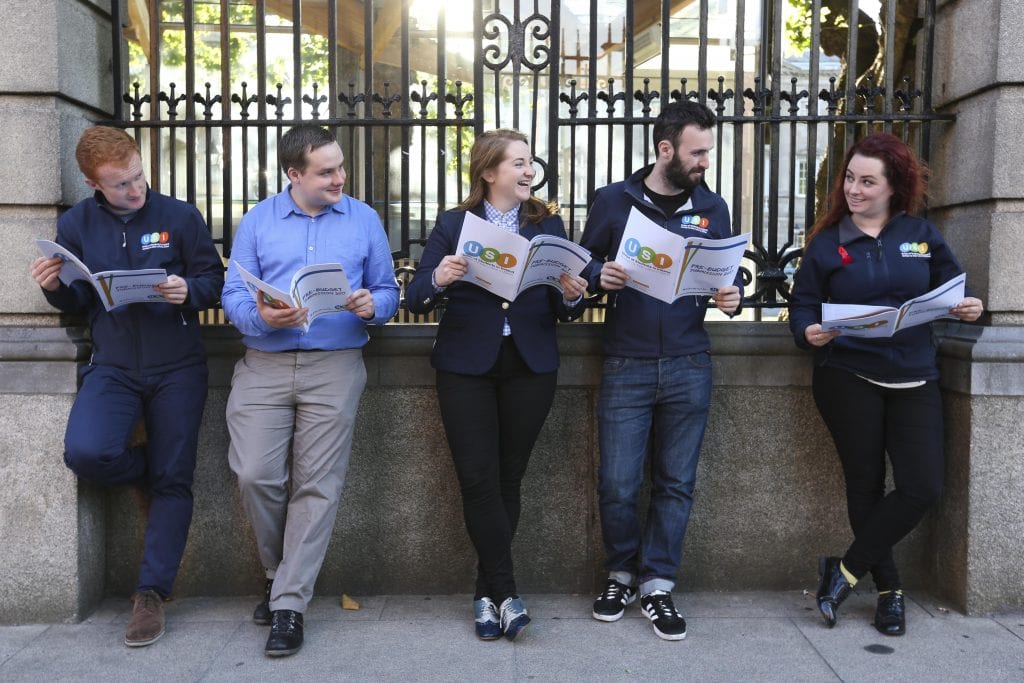 Proposal: For the government to reduce the Student Contribution charge by a minimum of €500.

Proposal: For the government to invest €140m into the higher education sector

Proposal: For the government to restore grant for student teachers’ attendance at mandatory Gaeltacht courses

Proposal: For the government to overturn the decision in Budget 2014 to impose the new pro-rata Student Contribution and reinstate the State contribution to fund apprenticeship fees.

Proposal: For the government to reverse cuts to student grants made in Budget 2011 and Budget 2012.

Proposal: For the government to reinstate the 2011 Adjacency Rates

Proposal: For the government to reinstate Postgraduate Grants

Proposal: For the government to begin phased restoration to 2012 rates of SAF to reflect the real costs attached to participation in Higher Level Education in Ireland.

Proposal: For the government to ring-fence funding of €37.5m annually and to put emphasis on local 24/7 crisis intervention services.

Proposal: For the government to invest in third-level mental health counselling

Costing: €5m ring-fenced for student counselling and supports per annum

Proposal: For the government to set the rate for all people under the age 26 to currently on reduced Jobseekers rates should have their payments set at the minimum adult rate of €188 per week.