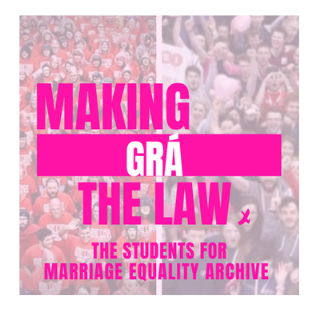 To celebrate the significant role of the student movement in the passing of Marriage Equality in Ireland in 2015, the Union of Students in Ireland has launched an online archive on the fifth anniversary of voting in the referendum.

Some 30,000 young people registered to vote in the Marriage Equality referendum and the USI has compiled reports, photographs, and videos to tell the story of the impact student activists had in organising the Yes vote.

Speaking of the pride students feel in the role they played in changing the country for the better, USI President, Lorna Fitzpatrick says: “On the fifth anniversary of when we ‘Made Grá The Law’ and our country became a more equal place for all citizens, USI is launching a website that portrays the vital role the student movement played during the Marriage Equality Referendum. Students, Students’ Unions and the USI organised for years in the lead up to the referendum.

“We ran voter registration drives in every college around the country and engaged in campaigns to support students getting out the vote. We called our grannies, we knocked on doors and we are proud to have played our part in changing our country for the better.”

USI Vice President for Equality and Citizenship, Megan Reilly explained that the archive seeks to recognise part of the vital and pivotal force for social justice in Ireland the student movement has been.

She said: “This archive is just a small snippet of the energy and dedication the student movement devoted to the Marriage Equality Referendum. With this archive, we honour and recognise the work done by students and student officers, who organised and challenged, who knocked on doors and stood up in front of their peers to bravely tell their stories. It was a once in a generation opportunity to change Ireland forever, and the student movement was right at the heart of it.”

The archive includes how the then USI President first called for Marriage Equality in 1977; the USI submission to the constitutional convention on Marriage Equality; how Students’ Unions effectively lobbied for exams to be moved so students could vote and the organisation of a bid to break the record for the largest heart made up of people.

The archive can be found here.