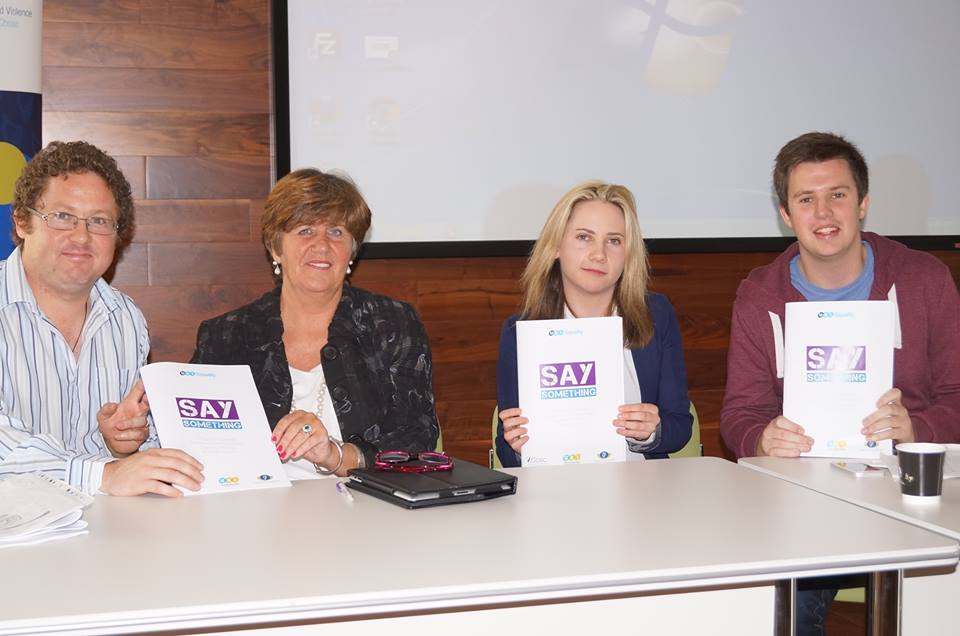 Keynote speaker Senator Ivana Bacik launched the findings of the “Say Something” study along with Ellen O’Malley Dunlop, CEO of the Dublin Rape Crisis Centre.

USI (Union of Students in Ireland) conducted this research project with the support of Cosc (National Office for the Prevention of Domestic, Sexual and Gender-based Violence).

This unique research study is the first of its kind and scale in Ireland. The study took place earlier this year between January 10th and February 15th 2013 with over 2,750 third level students responding online. The participants were of mixed gender and sexuality.

The report focused on the following areas; Unwanted Sexual Experiences, Physical Mistreatment, Harassment, Obsessive Behaviour and Information on Campus. Some of the key findings highlighted in the report include:

LGBT students account for 14.72% of respondents. The survey data suggests that LGBT students were more likely to have experienced the behaviours examined in the study than non-LGBT students:

While the number of Trans respondents was insufficient to draw firm conclusions, they indicate even more pronounced levels of students experiencing physical and sexual violence.

‘‘USI decided to conduct this study because there was a lack of research on this area. We hope that the results will help this area and inform future campaigns in relation to students’ experiences of violence, including physical violence, sexual violence, harassment, stalking and obsessive behaviour.

The victim is never to blame. USI hopes that this study will help to open up dialogue around these issues among the student body. The findings will now inform a national campaign aimed at raising awareness of the issues and of the supports available to students. USI will also organise training for Students’ Unions and college support staff around the issue.’’

‘‘Cosc was delighted to be in a position to support the roll-out of this particular study of both male and female experiences undertaken by the Union of Students in Ireland (USI). This is the first time that a study of this type and magnitude has been undertaken in Ireland. It is a significant milestone in Cosc’s goal to fill the gap of empirical evidence relevant to the lived experiences of the Irish population as a whole and, in particular, third-level students. Cosc looks forward to working with the USI into the future.’’

There will be pre-launch tea and coffee available at 10.30am ahead of the official launch of the research findings at 11am in the Trinity Long Room Hub, Trinity College, Dublin.