USI and We’re Not Leaving Ask: “Social Welfare Bill: Which Side Are You On Senators?” 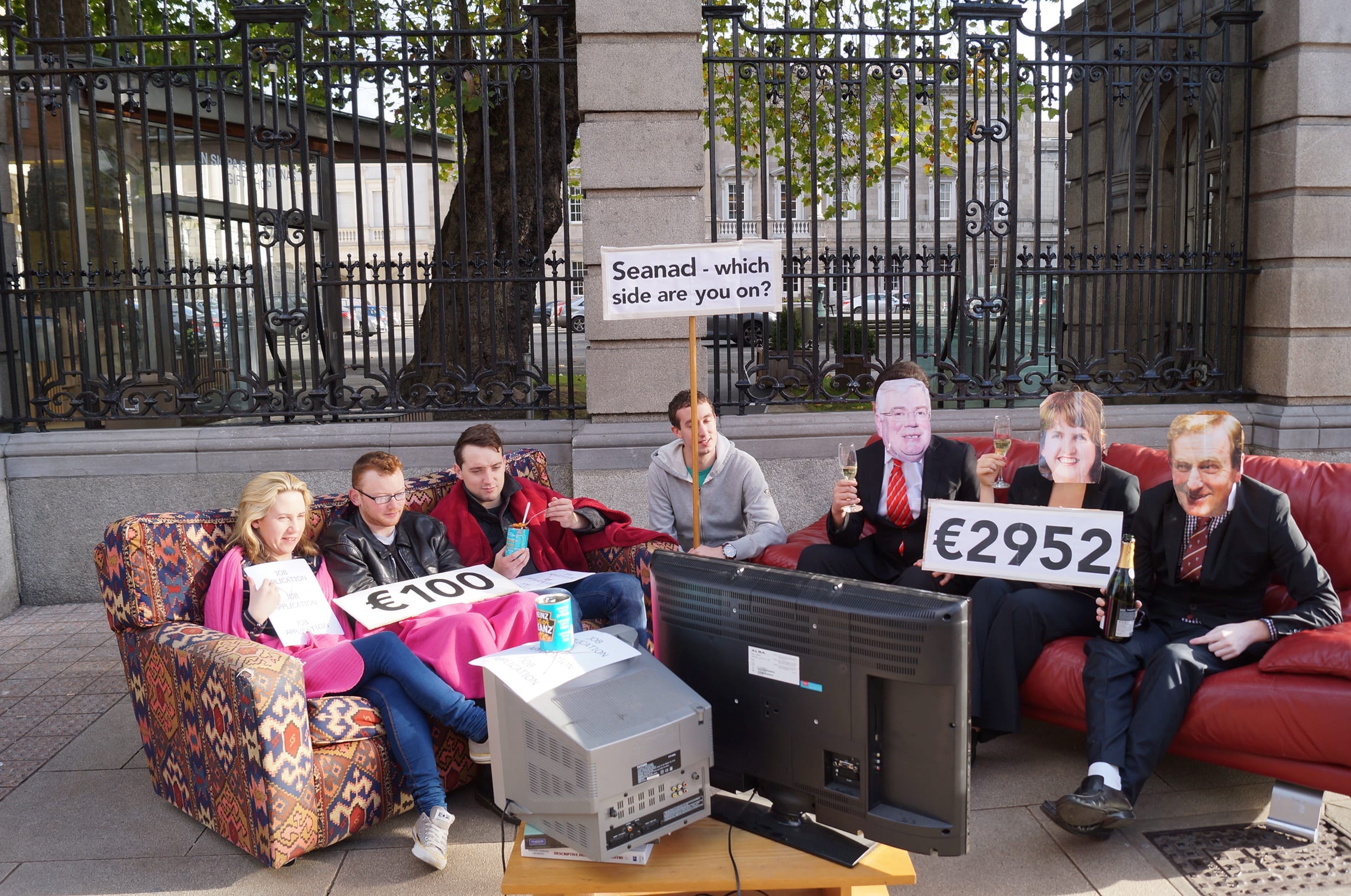 USI and We’re Not Leaving Ask:  “Social Welfare Bill: Which Side Are You On Senators?”

Today (Friday 1st November) a number of youth groups collaborated on a photo stunt that took place at 1pm outside Leinster House on Kildare Street. Students, young workers and the unemployed came together to protest the cuts to Jobseeker’s Allowance for those under 26. The stunt played on the derogatory comments made by government Ministers that young people should not be “at home watching a flat-screen television seven days a week”.

On one side of the image, characters depicting the Taoiseach, Tánaiste and Minister for Social Protection enjoyed a glass of Champagne while watching young people emigrating on a large flatscreen TV. On the other side, young people unable to find work who are now being asked to get by on just €100 a week crowded around a small TV, watching these political decisions being taken while surrounded by rejected job applications. Ahead of the Social Welfare Bill being debated in Seanad Eireann next week, the groups present ask “Senators: Which side are you on?”

“Today’s stunt shows the dismal situation that many young people are experiencing and just how separated our decision makers are from this reality. If this cut goes ahead, many highly skilled and highly qualified young people will be forced into emigration.

The government needs to concentrate its efforts on the Youth Guarantee and creating job opportunities across various sectors, instead of choosing to punish the most vulnerable young people in our society. The Senators that many young people voted to retain in the recent Seanad Referendum need to reciprocate this support.”

“Young people in Ireland are currently in a crisis- youth unemployment around 30% for four years, 26 applicants for every job and around half a million in total emigrated since the recession began the majority of them young. Asking people to live on €100 per week until they are 24 is a kick in the teeth to a generation that is already struggling with joblessness, emigration, fee hikes, unpaid internships and other problems.

The banking levy already amounts to an €850 million rebate to the banks compared with the lending guarantee it replaces. We propose an increase of €32 million to the levy – or 3.75% of the value of that rebate – to reverse these cuts. It’s time that young people were seen as the valuable part of this society that they are, and not just cannon fodder for a crisis they did not create.”

“In recent weeks the government has intensified its campaign of vilification against young people who, through no fault of their own, have found themselves having to rely on Jobseekers allowance in order to survive, the rates of which have now been savagely cut for those under 26.”

The stunt was  organised by We’re Not Leaving, the Union of Students in Ireland (USI), ICTU Youth, the Young Workers Network, Mandate Youth and SpunOut.ie – who will all be lobbying the Seanad to have the €32 million cut overturned and replaced with a commensurate increase in the banking levy.