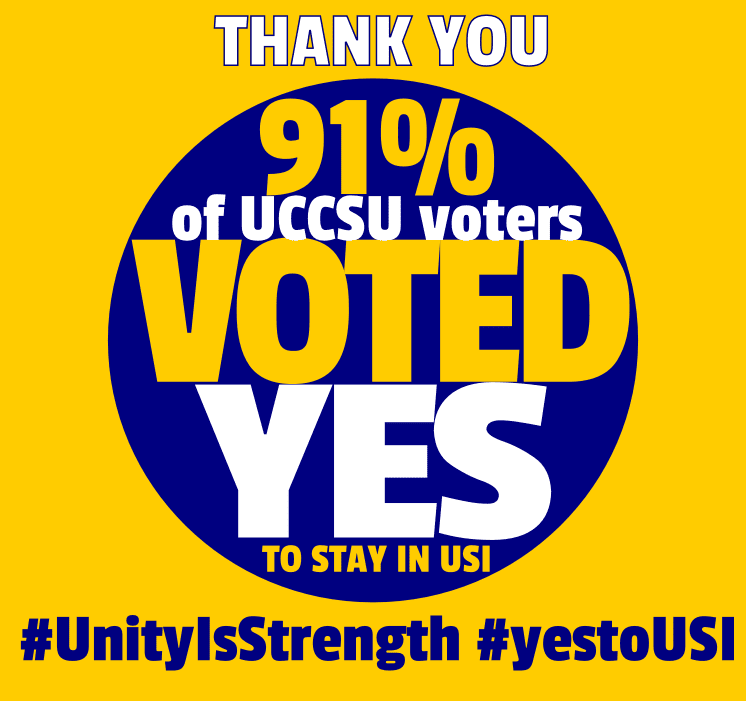 The Union of Students in Ireland has welcomed the decision of students in University College, Cork to remain affiliated to the national movement.

Resulting in a 91.4% support for remaining inside the national union.

In addition, UCCSU students voted on a resolution to support Marriage Equality as follows:

Resulting in a 95.42% support for Marriage Equality.

Speaking after the result was announced, USI President Laura Harmon, herself a UCC graduate, thanked the campaign team and the students of UCC.
“This result vindicates the work that a growing and strengthening student movement is doing. It shows that students back USI’s campaigns on education and the fight for a more equal Ireland and clearly demonstrates to policy makers and the political parties that, when USI speaks, we speak with the force, the power and the support of Ireland’s students.
The great thing about referendums is the voice of the students being heard. Students know education, we know what’s working and what’s failing.  We’re informed, we’re engaged and we’re ready for the general election as a united movement working without fear or favour in the interests of our members, their families and this country’s future.”
Martin Lynch, USI’s VP for the Southern Area and campaign manager for the USI affiliation referendum, said:
“I want to thank the campaign teams on both sides. We’re a stonger organisation today because of the efforts and passion each side showed to get the best deal for students. When students point out something we could do better, we seek to do better – we’ve shown that commitment. Our job now is to unite the students of Ireland to win a yes vote in the marriage equality referendum and make student issues a priority in the General Election”