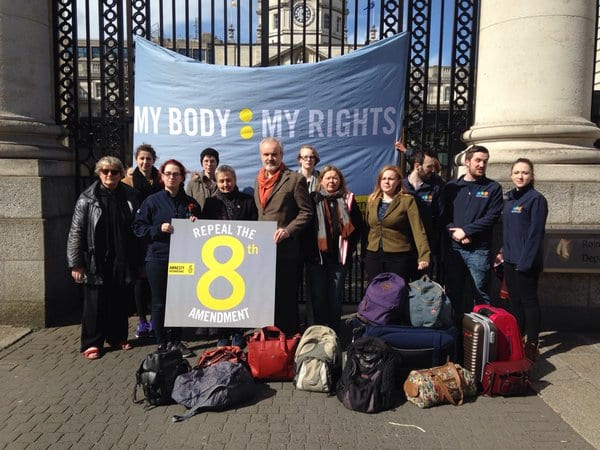 The Union of Students in Ireland joined Amnesty International outside the Dáil at 1pm yesterday, Tuesday the 29th March to call on the government to repeal the Eight Amendment. It was the first day of a two week demonstration calling on political parties and politicians to ensure abortion reform is not lost in negotiations in forming a new government. Standing with travel suitcases and bags to represent the 12 women and teenagers who travel to Britain every day for abortions, their demand is that the seriousness of the situation and urgency for a referendum is not ignored.

A recent Amnesty International and Red C Research & Markets poll found that 80% of people would vote yes if a referendum were held, and 87% of the public want access to abortion expanded. Every day for the next twelve weeks, 12 people will join the vigil outside Leinster House. The increasing numbers will remind political leaders of the amount of women anti-abortion laws negatively affect when they are forced into temporary exile from Ireland to access their human rights day after day, week after week.

“USI has been pro-choice and campaigning for Irish abortion services since the early 80s. We are proud to stand alongside and fully support Amnesty International in this campaign.” Union of Students in Ireland President, Kevin Donoghue, said, “We are urging the next Government to repeal the Protection of Life During Pregnancy Act 2013 as a matter of utmost urgency and replace it with laws that legalise free, safe and legal abortions in Ireland, at a minimum, in cases of rape, incest, risk to health or fatal foetal impairment; and to repeal the Regulation of Information (Services Outside the State for the Termination of Pregnancies) Act 1995 and any related censorship laws. Legalising abortions in Ireland is critical to advancing gender equality, human rights and the position of women in Irish society. USI is calling on the next government to put this to a referendum and let the Irish people decide.”

“It has been over a month since the election and we still do not have a government.” Colm O’Gorman, Executive Director of Amnesty International, said. “Over the next two weeks, efforts towards forming a government will ramp up. We will be here during lunchtime every day of those two weeks to demand that repealing the Eighth Amendment is on the table during those discussions. Today, we represent the 12 women and girls who we know will make the journey to the UK for an abortion. This doesn’t include the countless others who don’t give Irish addresses, or who travel to other countries. Each day for the next two weeks, the number of people demonstrating will increase by 12. The parties to the negotiations need to recognise that women will not stop travelling for abortions, and this issue will not be going away, during their time in government. A new government, whatever its composition, must not turn its back on the human rights of women and girls here in Ireland.” 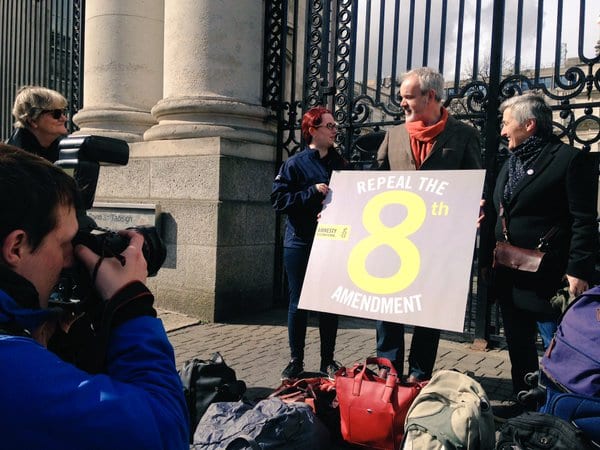