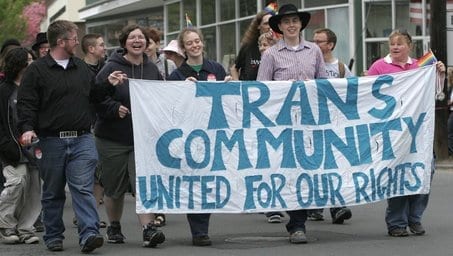 In 2012, trans* people are still not recognised by the Irish State.

This Saturday at 2.30pm, trans people, friends and allies from across Ireland and Europe will ‘Rally for Recognition’ outside the gates of Dáil Éireann to demand introduction of inclusive and respectful Gender Recognition legislation that will not enshrine pathologisation of trans identities into Irish law.

The Rally coincides with the European Region of the International Lesbian, Gay, Bisexual, Trans & Intersex Association (ILGA-Europe) annual conference which is taking place in Dublin this week.

The government’s June 2011 Gender Recognition Advisory Group (GRAG) report to Minister for Social Protection, Joan Burton, outlined recommendations for legislation to allow transgender people to change the gender marker on their birth certificates. The GRAG recommends that applicants must fulfil the medical criteria of a Gender Identity Disorder (GID) diagnosis or present evidence of gender reassignment surgery. GID is classified as a mental illness.

The Rally for Recognition is part of a global campaign. Every October, since 2007, an International Day of Action for Trans Depathologisation is called with demonstrations held in cities world-wide. The campaign aims to raise awareness that being trans is still considered a mental disorder and demands the depathologisation of trans identities.

Laura Harmon, the USI Vice-President for Equality and Citizenship will be speaking at the rally along with other speakers from ILGA-Europe, Amnesty International, Gay Doctors Ireland, BeLonG To Youth Services, LGBT Noise, Transgender Europe (TGEU) and Transgender Equality Network Ireland (TENI).

‘We are very pleased that this rally has been organised by Trans Education and Advocacy and this is an issue that our members feel strongly about. We have a mandate to campaign for respectful gender recognition legislation in Ireland and will continue to lobby on this issue and highlight it through our recently launched LGBT Allies campaign. The trans community in Ireland and allies will not sit back and tolerate this ongoing lack of recognition and rights.”

Trans is an inclusive umbrella term referring to people whose gender identity and/or gender expression differs from the sex assigned to them at birth.