What is the HEA Bill?

The HEA Bill is legislation that updates the HEA Act of 1971. It looks at the governance structures across colleges, universities and technological universities in the public sector, as well as the Higher Education Authority (HEA).

The Bill amends the current structure of the HEA to introduce a “competency based” board rather than a representative one. It also amends current governing authority structures in Higher Education Institutions to make them smaller in an effort to follow “good governance practice”.

Student Representation in the HEA Bill

The HEA Bill outlines that the governing authority of each HEI should include three student representatives. This was initially capped at two, but successful lobbying from students, students’ unions and USI saw the total representatives increase to three.

The Bill does not legislate for democratically elected student representation – this means that colleges can handpick which students sit on their governing body.

The Bill does not define students’ unions as democratically elected – instead stating that is “any student representative body recognised by a higher education provider or by the Minister”.

The Bill does not consider the unique role of students’ unions on a governing authority – as the primary advocates for the members.

The Bill does not guarantee trade union representation – meaning that academic staff and postgraduate workers do not have guaranteed union advocates on governing authorities.

Definition of a Students' Union

The definition of a Students’ Union provided by the HEA Bill is as follows;
“Student Union” means a student union or other student representative body recognised by a higher education provider or by the Minister.

The Minister clarified to USI that the weak definition came from the fact that the role of a Students’ Union within the HEA Bill is limited to a consultative role. Indeed, the only time that students’ unions are mentioned are in relation to consulting on HEIs’ strategic development plans, equality statements and other such guidelines, codes and policies.

However, this consultative role is not limited to being carried out by Students’ Unions – instead allowing for unelected students chosen by the colleges to play a role in the drafting of important policy documentation.

Students’ Unions are democratically chosen by their members (the students) to represent the views and opinions of the student body. This mandate is crucial to any definition of a Students’ Union.

The only recognition a students’ union should need is from our members – the students. 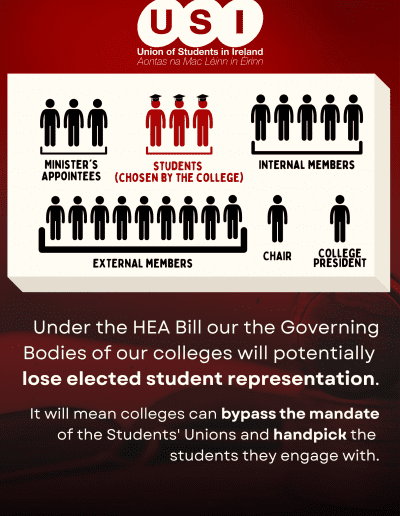 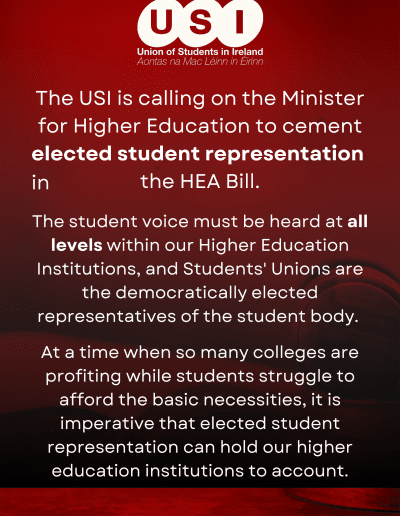 “By neglecting to include the democratic mandate that students’ unions receive from their student members, the definition included in the HEA Bill ignores the most vital aspect of our unions – democracy”

Union of Students' in Ireland

USI Open Letter on Student Representation in the HEA Bill
USI Email to Senators on the HEA Bill
Read the HEA Bill 2022
We use cookies to ensure that we give you the best experience on our website. If you continue to use this site we will assume that you are happy with it.AcceptPrivacy Policy