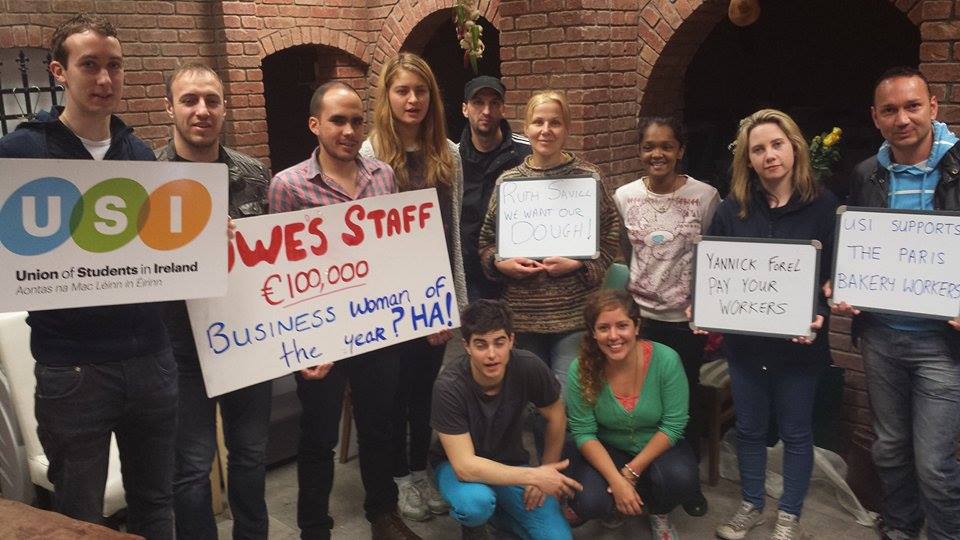 USI President Joe O’Connor and VP for Equality and Citizenship Laura Harmon have joined with struggling former employees of Dublin’s Paris Bakery, who are occupying their former workplace demanding to be paid outstanding wages owed to them. It’s estimated that the owners of the bakery have exploited a loophole in the law to deny workers over €100,000 in owed pay. Later Joe and Laura will travel to a picket at the home of Ruth Savill, one of the owners of the defunct business.

Speaking at the occupation on Dublin’s Moore Street, Joe O’Connor joined calls for the former employers of the workers, Ruth Savill and Yannick Forel, to pay their workers what they were owed, and added:

“The government must immediately open up supports to care for these workers, who’ve been forced to sleep in their former workplace and survive on donations from well-meaning strangers.

But that won’t suffice – The government must now step in to close this monstrous loophole which makes workers beg for their wages.

If a business ceases trading and lays off its staff, it’s nonsensical that by simply not winding up the company it can deny its staff the pay they worked for – this ridiculous technicality needs to be addressed immediately, so that bad faith employers can’t avoid giving their workers their daily bread.”

UPDATED: Changed to reflect new material and to include quote from JOC 1540Z