For the Government to rule out any possible introduction of an income contingent loan scheme and to  reduce the Student Contribution Charge by a minimum of €250 and invest €1.26bn into higher education over the next decade.

Budget 2018 can reduce the financial burden on families until the deliberation of the Oireachtas Committee on Education and Skills has concluded. The Student Contribution Charge jumped from €1500 to €2000 in Budget 2011 and continued to increase in increments of €250 until it reached €3000 in 2015. A decrease in fee level would come at a relatively small cost to the state and alleviate pressure on the payment of fees that have doubled over a period of six years. The Student Contribution Charge is abnormally high by European standards, and second only to the United Kingdom within in the EU.

Public benefits include the additional income tax as a result of higher earnings, additional social security contributions and low reliance on social welfare; and lower social transfer expenditure. Many supportive public representatives have expressed a hesitation that the state cannot afford an immediate investment of €1.26bn, which has been identified by the ‘Investing In National Ambition’ as the amount of additional public funding required to run a high-quality higher education sector. USI emphasises that the investment is required over a period of 14 years as the charge is removed.

The DIT Campus Life Cost of Living Guide (2015) estimates the cost of living while studying at third-level at €11,000 per annum. The sum is made up of many different costs, of which the Student Contribution Charge is the second largest after rent. The only cost of attending third-level that can be directly addressed in the budget is this charge.

Access to higher education, if it is to deliver the maximum public utility and return on investment for the whole society, should be broad based and without distinction according to socio-economic background.  Access should not simply be about getting more people into higher education, but about creating pathways for the most people to the best form and level of education for them, their communities and the society. Prospective students from lower-income groups appear to be more debt-averse.  These groups are more likely to be uncertain about the risks and returns on educational investment and more likely to reject the accrual of significant debts such as are envisaged in any post-pay system for education.  Debt aversion is a class issue and a deterrent to prospective students, even outweighing aspiration, career-work objectives, encouragement and other social factors. 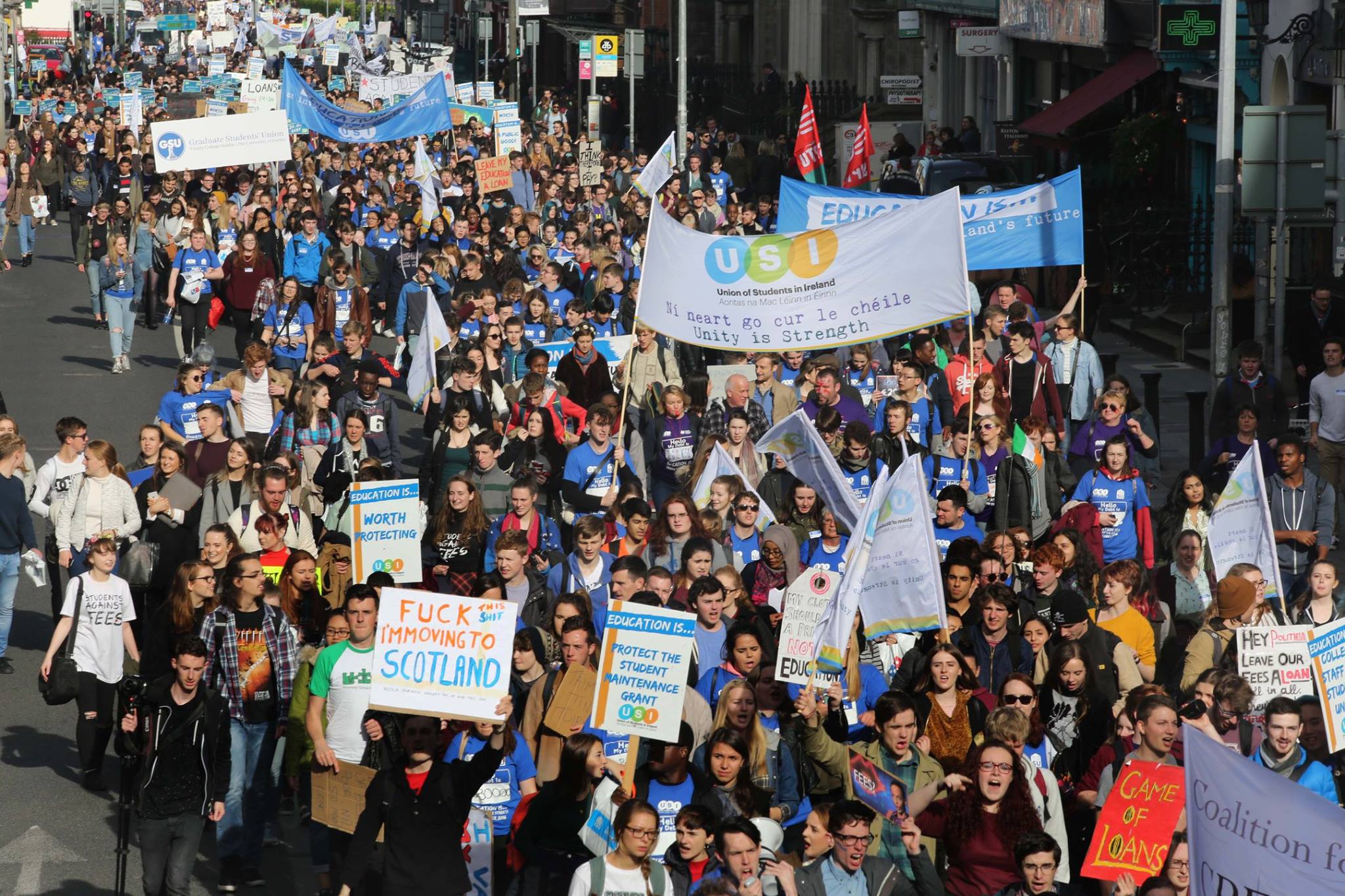 Over 12,000 people take to the streets on October 19th 2017 for publicly funded higher education

Student debt has proven to be a deterrent to lenders in other jurisdictions where student loans have been introduced.  Additionally, repayment of student loans restricts the ability of a graduate to save for deposits. This has significant impacts on the ability of future graduates to secure mortgages, car loans or own their own homes. A reduced cost of third-level will have positive consequences for student retention, participation, and mental health, as well as raising standards of living and reducing over-dependence on part-time employment. USI proposes that the government further subsidise higher education institutions by a minimum of €17m in order to deliver a reduction in the Student Contribution Charge of at least €250.

One method to fund this is to increase percentage of tax revenue as a per cent of GDP (currently at 30% to the OECD average of 34% through progressive taxation measures.  This can be in the form of spending, income or revenue. If people can graduate debt free, they will immediately begin to save and spend more while contributing to the labour market.  Evidence shows that those 40 years old or younger households with student debt have far less wealth than those without student debt.

To add, USI are asking that the Government increase funding for Higher Education Institute’s running multiple campuses. The HEA review revealed high costs associated with the delivery of education in these smaller campuses and revealed campus deficits of €1.3mn for Killybegs (run by LYIT); €2mn at Castlebar and €700,000 at Letterfrack (run by GMIT); and €1mn at the National Maritime College (run by CIT). These deficits make a major contribution to the overall deficit position of these institutes. USI ask that the increase in funding be allocated to protect these campuses.