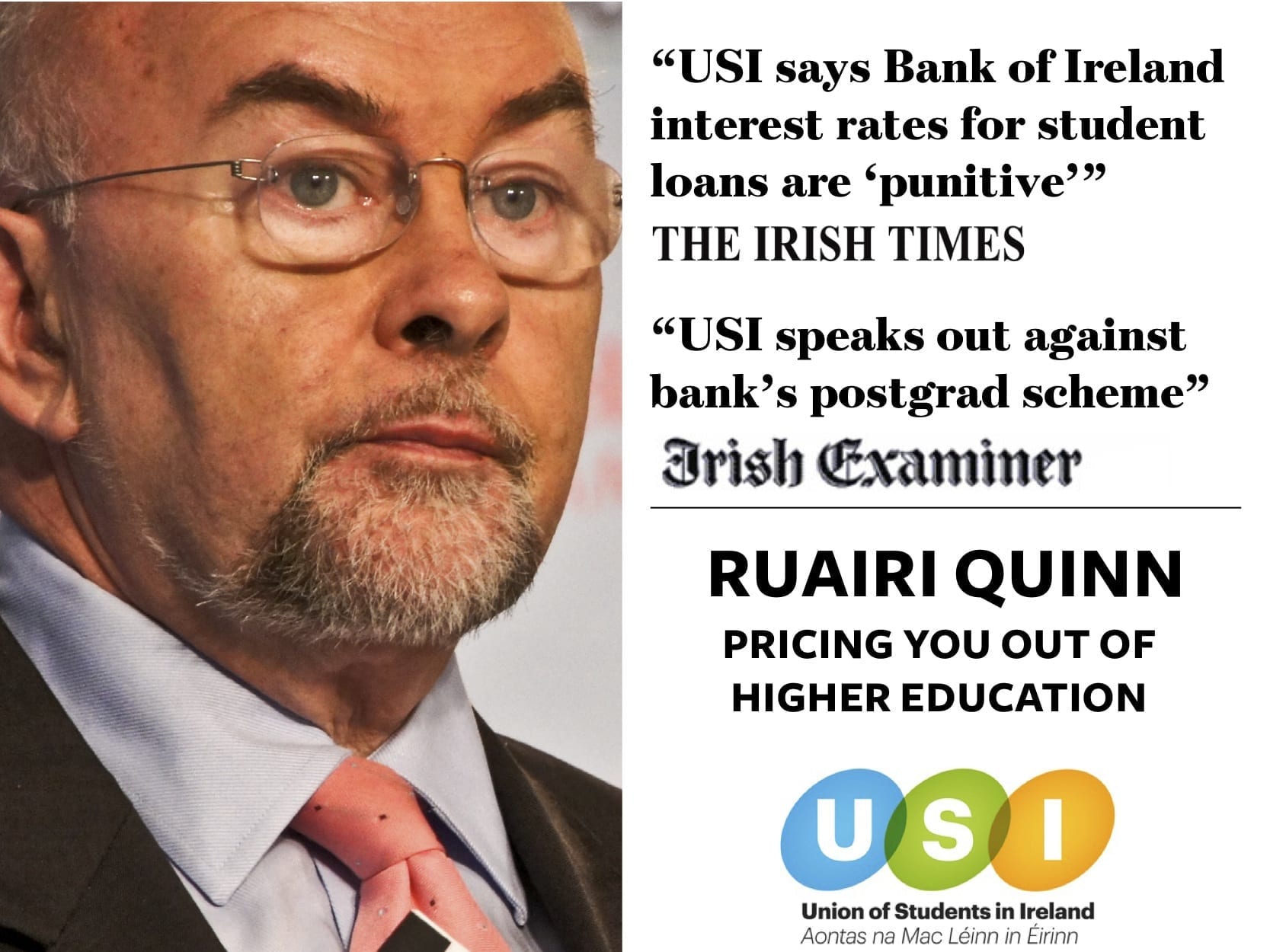 The Union of Students in Ireland has learned, and it has been reported, that Bank of Ireland (BOI) intends to announce an expansion of the student loan scheme that was recently adopted by Trinity College, DCU and Mary Immaculate. The scheme is now set to launch in over twenty third level institutions around the country.

“USI acknowledges that the loan scheme may help students and families to cope with the financial burden placed on them by an ever-increasing Student Contribution Charge (SCC – currently €2,250). People who avail of the loan scheme will not have to pay the SCC in one or two large instalments per year, but instead will pay BOI €100 per month at a discounted rate of interest.

However, USI has some grave concerns about the short-term and long-term effects of the scheme.

Second, there are a number of significant discrepancies between the literature that BOI has published and what Students’ Unions thought had been agreed. For example, in the bank’s literature it quite clearly states that, under this scheme, a loan will be given for the duration of the undergraduate degree and on fixed terms. This would preclude adjustments to account for any increases in the SCC, leaving the student to find an alternative way to pay for the increase. Some Students’ Unions have said that they had agreed with BOI that the loans would be reviewed from year-to-year to account for such changes.

However, it’s the long-term effects of this scheme that are particularly worrying to USI.

The scheme could lead to a steep increase in fees, as it gives the Government the impression that finance is available to cope with such increases. If this were to occur, it would not be long before we find ourselves in a comparable situation to the United States, where graduates are burdened with massive debt upon leaving college because they have to take out ever-more-onerous loans to pay for steep increases in fees.

It also creates a ‘debt culture’ whereby the main means of financing a third level qualification is to apply for a loan from a private bank. There is no ‘public option’ available at the moment and the Government is unlikely to be able to offer one before the current bailout ends in 2018. Thus leaving six years for Ireland’s third level students to become indebted to a finance programme that is privately run and profit-driven. Not even in the U.S. does this situation exist. The government there offers student loans and the majority of students who opt to take a loan favour the federal route.

USI’s main priority is, and has always been, to ensure access to education for all students regardless of their socio-economic background. There is no avoiding the conclusion that an escalation of ‘debt culture’ combined with consistent increases in fees will lead to the exclusion of students from lower socio-economic backgrounds; students who can barely afford to attend college now and who are, or will be, debt averse in future due to the spiralling costs of attaining a third level qualification.

So it has been in other countries, and so it will be in Ireland. We must avoid this at all costs.”