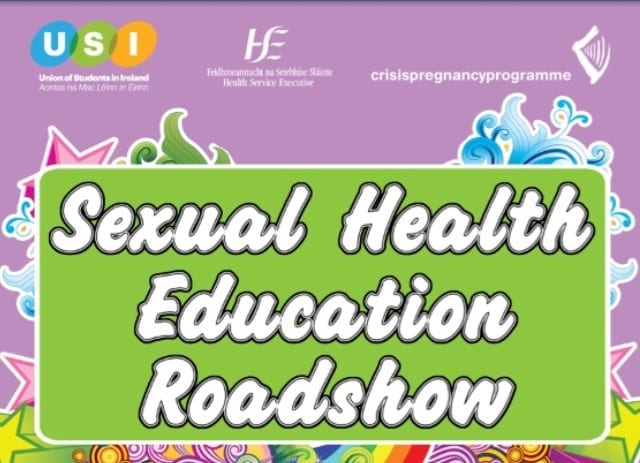 The Union of Students in Ireland will launch its Sexual Health Education Roadshow today in NUI Maynooth at 1pm. The Roadshow is intended to educate college students about their sexual health in the hope that students who are sexually active will have enjoyable, consensual, safer sex.

The Roadshow will visit four campuses from September to December and will be supplemented by an online awareness campaign. Attractions for students include interactive and educational stands run by sexual health organisations, Think Contraception branded Eco Cabs & digital game, promotion of STI tests and contraception choices, sexual health workshops, a sexual health magician, a chance of winning a Durex hamper and much more!

The ICCP 2010 study also found that the most common reason cited by 18-25 year olds for not always using contraception in the past year was because sex was not planned or they were unprepared (58%), while 32% cited the influence of drinking alcohol or taking drugs.

The HSE Crisis Pregnancy Programme recently launched a new phase of its Think Contraception campaign that uses TV sponsorships, on-the-street promotion, poster and digital advertising and social media connections to promote its key message, that when it comes to risk of STIs or unplanned pregnancy – Johnny’s got you covered.

The campaign character ‘Johnny’ represents the safety and reassurance of using a condom and encourages young men and women, the vast majority of whom have had sexual intercourse by the time they reach 25, to plan for, and consistently use condoms to protect against unplanned pregnancy and sexually transmitted infections (STIs).

“This Roadshow is part of an ongoing campaign to engage students on issues relating to their sexual health. The statistics show that while the number of students practicing safer sex is encouraging, a worrying number of students are still having unprotected sex and not checking themselves for STIs.

We want our members to enjoy healthy, safe and consensual sex and the priority with this Roadshow is to promote healthy attitudes to sex.”