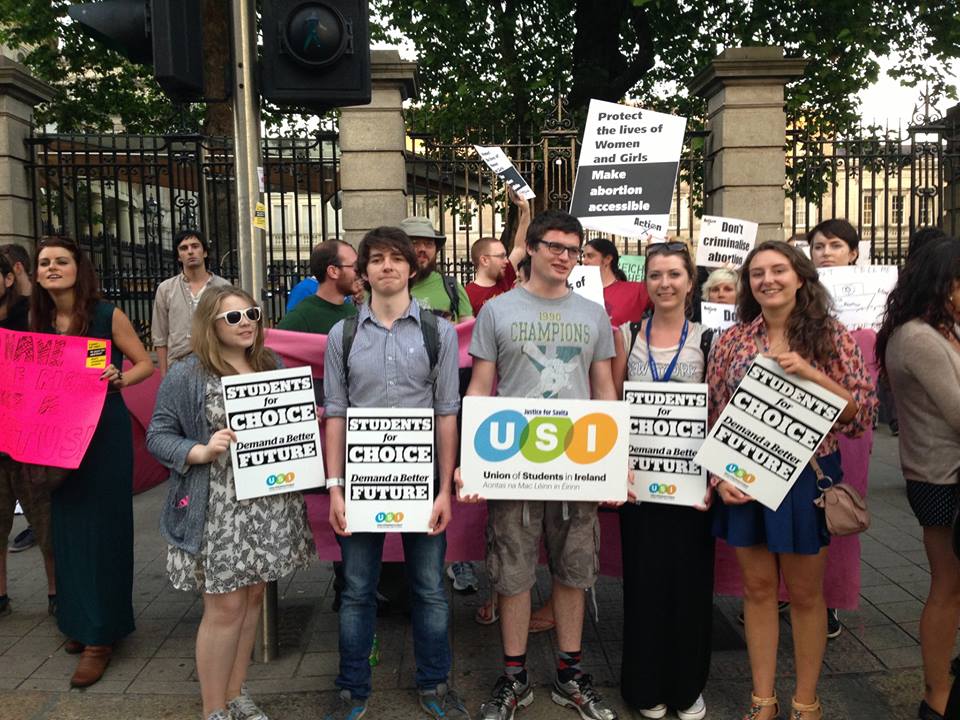 The Union of Students in Ireland last night (July 9th 2013) supported the Abortion Rights Campaign’s camp for choice outside Dáil Éireann. A number of pro-choice activists camped out all night to highlight the need for accessible abortion in Ireland.

USI acknowledges that the ‘Protection of Life During Pregnancy Bill’ is a first step in bringing Irish law in line with the x case ruling. The enactment of legislation establishes the principle that abortion can be legislated for in Ireland. However, USI believes that the bill is excessively restrictive and will not protect women.

Minister for Health, James O’Reilly, has indicated that he will try to put late amendments to the Bill that put even more obstacles in the way of women having access to abortion and which could make doctors delay carrying out a life-saving termination.

For law to be meaningful it must be accessible. The Bill falls short of international human rights standards on women’s reproductive rights. It is not clear that the bill would fulfil the judgement of the European Court of Human Rights in the case of A, B & C v Ireland.

It is unacceptable that a woman or girl can face a 14-year prison sentence for terminating a pregnancy. The criminal sanction against the ‘destruction of unborn human life’ means that during inevitable miscarriage, if there is a foetal heartbeat a doctor will have to delay termination until the foetus dies or the woman faces ‘a real and substantial risk to her life’.

The European Court of Human Rights have criticised the inclusion of harsh criminal sanctions in its judgement in the A, B and C v Ireland case. It concluded that criminalisation created a significant ‘chilling factor’ for both women and their doctors.

Joe O’Connor, President of the Union of Students in Ireland said:

‘Any further restrictions to what is an already extremely restrictive piece of legislation cannot and should not be tolerated.

The bill sets out to protect life, but given the severe restrictions being placed on suicidal women and the failure to deal with situations of rape, incest or fatal fetal abnormalities, it clearly does not go far enough to adequately protect the health and wellbeing of women.

This State will now enshrine into our legislation an approval of the continued outsourcing of this issue to the UK and beyond, and while this is a vital and necessary step, it is far from the final one required.

A liberalised abortion regime is often spoken of in this debate in a highly negative way, but there is nothing particularly liberal about trusting the women of this country and allowing them free rein over their own bodies.

USI calls for no amendments to be passed which put further barriers in the way of women faced with an already incredibly challenging situation.’

‘This bill is not progressive. It will enshrine the already existing situation which makes abortion a class issue. Young women from lower socio-economic backgrounds are discriminated against because of their inability to afford the significant costs of traveling abroad for an abortions. It costs at least €1,000 to travel to England for a termination, including clinic costs, travel and accommodation. Young women or girls, whether students or not, usually do not have ready access to such funds.’

USI will be attending a rally organised by Action on X outside Dáil Eireann this evening at 6pm.

The Union of Students in Ireland is a pro-choice organisation. Pro-choice policy was re-affirmed at USI Congress in March 2013.

USI regards this as an issue which affects many students. In 2011, UK Department of Health statistics show that 4,049 Irish women availed of abortion services in England and Wales. Of these women, 1,404 were between the ages of 18-24 and 2,566 of these were under the age of 30. Crucially, these figures are probably an underestimation of the true numbers as many Irish women give no Irish address for reasons of confidentiality.