Trinity College, Dublin students have been at the forefront of the Union of Students in Ireland since you helped found it in 1959. Vote No and retain the voice TCDSU has in the national student movement. 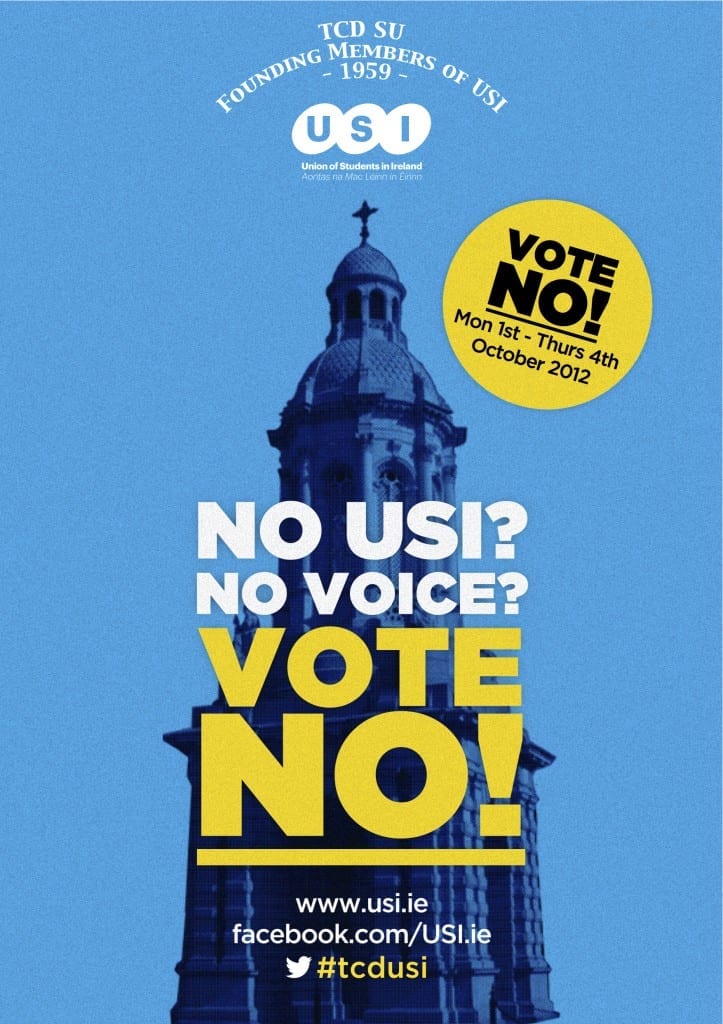 BE PART OF USI FOR…National Representation

USI is recognised by Government, industry and institutional representative groups as the voice of students on a national level. USI represents students on the board of Higher Education Authority – the state agency that funds the universities and advises the Government on higher education policy, the IUQB (Irish Universities Quality Board) and the NQAI (National Qualifications Authority of Ireland) – the agencies that ensure your degree is recognised internationally and that your own institutes quality assurance exceeds global quality assurance standards.

Through membership of USI, your students can ensure that their voice is heard on a national level with direct access to the Minister, Department of Education, Government and the Oireachtas.

BE PART OF USI FOR…LGBT Rights

For decades, USI has been leading national campaigns for LGBT rights. Today, USI Works in partnership with other organisations such as LGBT Noise, BeLonGTo and Marriage Equality to fight for marriage equality and removing the ban on the LGBT community donating blood. This summer, USI, with its members, joined the LGBT Noise “March for Marriage” to fight for equal access to civil marriage for the LGBT community.

Every year USI runs a LGBT Activist Training event call Pink Training which is now the largest and most successful event of its kind in Europe. Workshops and seminars help prepare LGBT Society Officers and Activists to run local campaigns raising awareness and delivering supports to LGBT students. This training event, after a Congress 2012 motion, is now open to non-affiliated Students’ Unions but with member organisations getting first preference.

BE PART OF USI FOR…Equality

USI’s Equality Campaign has four major focuses; students with disability, international students, gender equality and mature students. The main aims of the campaign is to raise awareness among students of their rights and lecturers of their responsibilities, to lobby for appropriate funding and supports to be provided for students so that every student, regardless of their circumstances, can achieve their potential.

BE PART OF USI FOR…Protecting the Grant

One of USI’s fundamental objectives is to ensure equity of access to higher education. In 2011 USI secured the passing of the Student Support Act which will revolutionise the grants from September 2012. No longer will students be forced to wait months on end to receive a grant cheque – their grant application will be made online and payments will be received on a monthly basis directly into the student’s bank account. For the first time ever students will be able to appeal grant decisions to an independent grants appeal agency which includes representation from USI.

In Budget 2011, the Government announced that mature students will no longer automatically qualify for the higher non-adjacent rate of the grant and that the threshold will increase from 24km to 45km. This decision resulted in the most vulnerable students loosing 60% of their grant overnight. Last year, USI brought the Government to the High Court in order to have the decision reversed; the decision from the courts which went against USI is currently being appealed.

BE PART OF USI FOR…Training and Support

In addition to campaigning on issues that affect you, USI also provides around-the-clock support to your our affiliated Students’ Union. Whether it’s advice on helping a student in need of financial support or help running a campaign in TCD, USI officers are always on hand to offer assistance.

Every summer, USI holds Students’ Union Training where we hold a week long training event. We run workshops and modules that provide the support and skill set your Students’ Union Team will need for helping and assisting students for the coming year.

This year, USI has created a partnership that gives TCD students the opportunity to purchase a laptop for just €120! Check out www.usi.ie for more details.

USI Pink Training is the largest training event for LBGT students in Ireland and Britain and consists of a weekend of modules and workshops covering a wide range of subjects from Coming Out to Activism on Campus.

BE PART OF USI FOR…Protecting Postgraduates

In July 2012 Bank of Ireland announced a loan scheme for postgraduate students limited to those registering for one or two year postgrad programmes. The scheme excludes PhD students. The scheme is also subject to an extortionate interest rate of 10.8%. USI is working with local Unions and their postgrad representatives to propose a fair loan scheme available to all postgraduate students.

USI is also working with the Irish League of Credit Unions to provide a more equitable scheme in the short-term.

BE PART OF USI FOR…Quality Assurance

With institutions under increasing pressure to make cuts the issue of slipping standards is a serious concern. USI will be working with the newly set up Qualifications and Quality Association of Ireland as the student representatives to ensure not only that the quality of research and teaching is maintained but enhanced and improved at all levels. 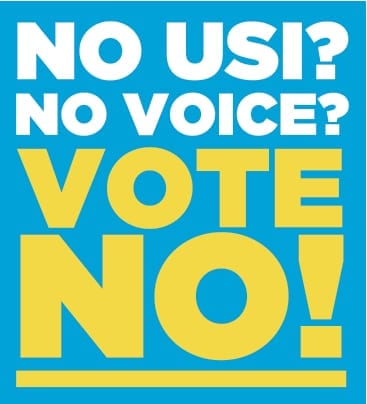 TCD SU would receive equal coverage from the national media for its campaigns and concerns with Government Policy.

USI is recognised as the national representative student body. When student issues are in the public domain the USI President is the only recognised spokesperson and appears regularly on national television, national radio and in regional media across the country.

USI represents all students from Higher Certificate (Level 6) right up to PhD (Level 10) to Government agencies such as the Higher Education Authority. USI hold regular Postgrad Seminars to address issues affecting this cohort of students.

Other than fighting increases in fees, USI does nothing for me and doesn’t benefit the average student.

Throughout the year USI works on a range of issues to provide TCD SU with support for campaigns such as supplying thousands of SHAG packs, Mental Health packs and materials for other campaigns. Last year USI secured a huge increase to the Student Assistance Fund providing €132,000 for TCD students.

USI has never achieved anything and is not worth the money.

Over the past five years alone USI has reduced VAT on condoms, created a national internship scheme providing 5,000 internships for unemployed graduates, secured the introduction of the Student Support Act to ensure that students receive their grants on time and registered over 15,000 students to vote prior to election 2011.

USI is not necessary, TCD SU’s officers could organise national campaigns in conjunction with other SUs.

Your SU officers are so busy in their local affairs that to take on the responsibility of running national campaigns or co-ordinating with other Students’ Unions would divert their time from important issues in TCD.

Nothing will change if we leave USI, we’ll still get all the benefits.

USI provides round the clock advice to your SU officers on a wide variety of issues affecting you. USI also provides training throughout the year for SU officers to best equip them to represent you. We also providing training to students such as Activist Academy, Pink Training, Environmental Awareness Training and First Aid Training to name but a few. These benefits are only available to member of USI.

The Union of Students in Ireland (USI) is the national representative body for students in further and higher education. Founded in 1959, USI currently represents over 250,000 students in over forty colleges across Ireland.

Throughout its history USI has evolved continuously to reflect the changing needs of students deliver for them and bring about a better Ireland.

Today, USI is recognised by Government, Institutions and Industry as being the voice of students at a national level and having a key part in shaping the future of Higher Education in Ireland.

Through lobbying and campaigning on issues from equity of access, such as fees and grants, to mental health and same sex marriages, USI works tirelessly to provide students with a better standard of living and to effect change in society.

Voting in the referendum is simple. While voting for your class rep you’ll be given a referendum ballot. On the ballot you’ll be asked the following question:

“Do you want Trinity College Students’ Union to disaffiliate from the Union of Students in Ireland?” We urge you to tick the ‘NO’ box for the reasons outlined in this document.