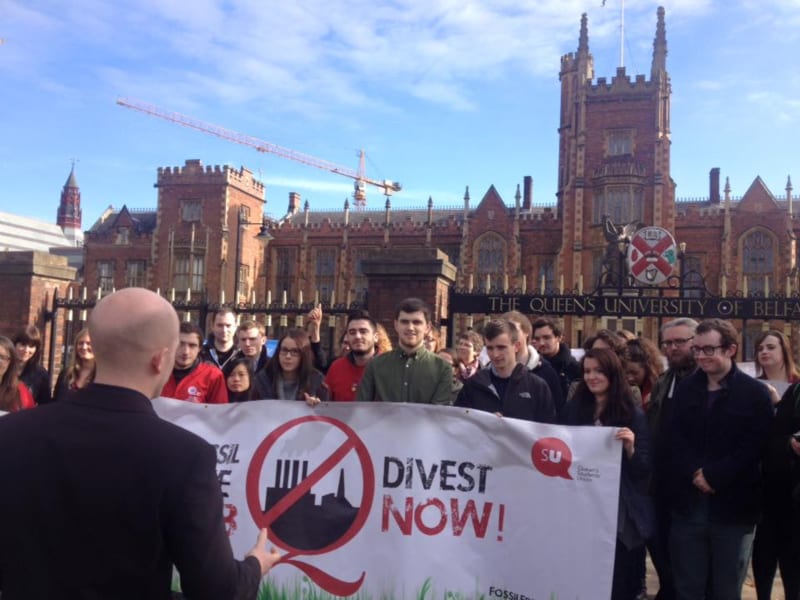 The Union of Students in Ireland praised Queen’s University Belfast Students’ Union (QUBSU) and said they stand in solidarity with their Fossil Free campaign, which calls on the University to divest from fossil fuels. Students went into occupation phase with a sit-in protest for the past 5 days in the Finance Office of the administration building in Queen’s. Queen’s University have at least £5.5 million invested in the fossil fuel industry.

“What QUBSU are doing with their Fossil Free campaign is admirable.” Union of Students in Ireland President, Kevin Donoghue, said “They’re taking action against their university making new fossil fuel investments; they want their college to make a public statement pledging to divest to a low-carbon future with the QUBSU, and they want Queen’s to agree to a deadline to divesting themselves completely of all fossil fuels by 2020. USI stands in solidarity with QUBSU and we encourage more students across Ireland to do the same. Students understand and appreciate that climate change should be prioritised as a matter of urgency.”

“As a place that is supposed to be about learning and liberation it is deeply disturbing that it is attempting to make personal gain whilst ignoring scientific consensus and dooming us all to a future of climate chaos.” Bradley Allsop, Queen’s student, said “As students, scholars and citizens we’ve had enough- the time for action is now.”

Average global temperatures have already increased by 1C this century. Ireland has the highest proportion of emissions of any EU member state. The EU requires a 20pc cut by 2020 over 2005 levels – on the current pathway, Ireland will have reduced by just 5pc by 2020, well below the target.

“The evidence that the planet is now in a state of climate chaos is no longer ignorable.” Donoghue said, “The government’s commitment to addressing climate change is far slower than the rapid pace the climate is changing. The planet cannot wait five years for us to make these changes and commit to meeting the targets set out by the EU. Students are a huge part of Ireland’s future and they are acting to preserve this future.”