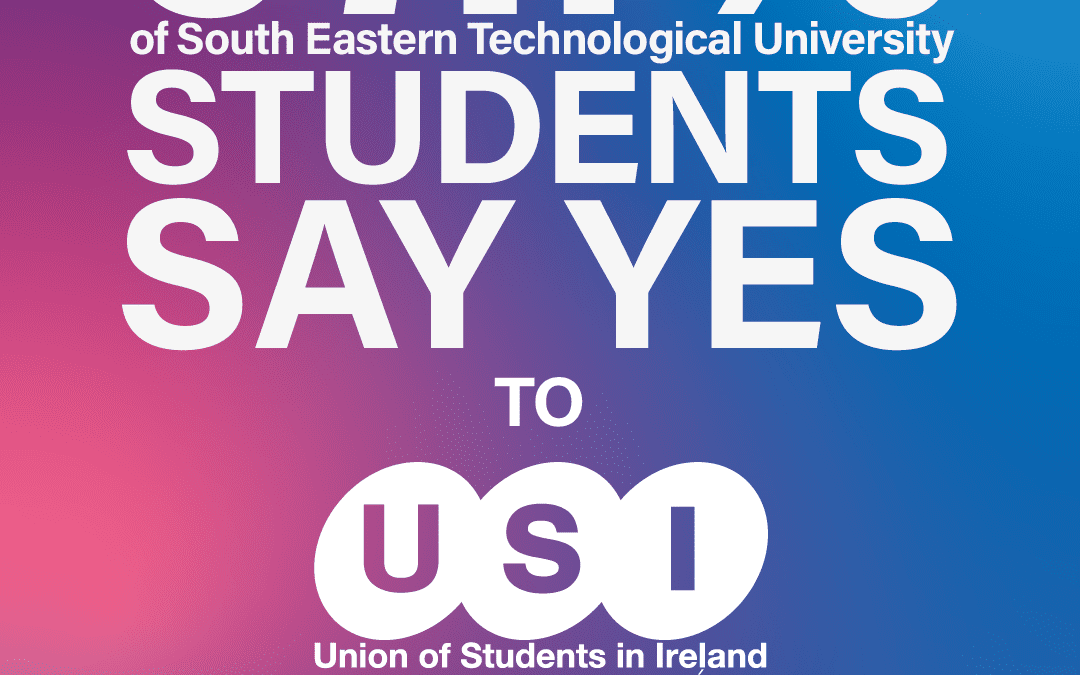 USI backed by 97% of students in South Eastern TU

The Union of Students in Ireland has welcomed the results of an affiliation referendum at the new South Eastern Technological University, in which 97.1% of students voting opted to join the national movement.

Students at SETU were voting on a proposal to merge the previously existing two Students’ Unions into one, and whether to apply for membership of USI.  They have overwhelmingly endorsed both proposals.

“USI wants to thank the students at the new South Eastern Technological University for their resounding vote of confidence in the national student movement. As we face into a cost of living crisis, a housing catastrophe and a period of instability in the education system, students in the South East of Ireland have shown that they want a strong, unified national student voice to stand up for them and engage with government, the education system and their colleges in their interests.  They reminded us this week that there is no strength without Unity and we are delighted as the newly merged SETU SU comes into existence they do so as proud members of USI, their members will continue to feed into the escalation of activities USI are taking against the cost of living and cost of education crises.”

“It has been a pleasure to meet and hear from so many students in Carlow and Waterford about their concerns for the future and how they want USI to help them. We’re honoured to have secured the support of the vast majority of the students who voted, and I look forward to continuing to represent them and their views. I also want to extend my thanks to SETU SU for having me and other members of the Coiste on campus we were delighted to be able to have such a strong presence on campuses and of course thanks to SETU students for being so engaged with us. We can’t wait to continue to support you for years to comes

The Union of Students in Ireland is the nationally recognised student representative movement, with over 320,000 members in member students’ unions across the island of Ireland.  In Northern Ireland, USI works in partnership with the UK’s National Union of Students in the joint body NUS-USI.

Both IT Carlow Student’s Union and Waterford Institute of Technology Students’ Unions are members of USI, and the new body ‘SETUSU’ will be a member on its formal formation on 1 July 2023.