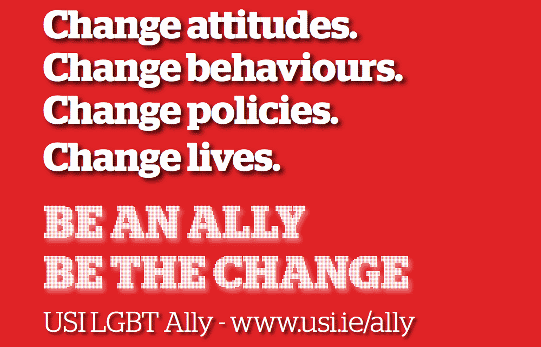 What is the campaign?

The USI LGBT Ally campaign is the first campaign of its kind that the Union of Students in Ireland has run. The purpose of the campaign is to raise awareness of Lesbian, Gay, Bisexual and Transgender equality issues among students and to showcase the support that non-LGBT people have for the LGBT community.
An LGBT Ally is someone who supports the Lesbian, Gay, Bisexual and Transgender community and equality for LGBT people. An LGBT Ally is somebody who will defend their LGBT friends or classmates against discrimination and does not use language that is anti-LGBT.

What can LGBT Allies do to support LGBT rights in Ireland?

Allies of the lesbian, gay, bisexual and transgender community can do loads of things to support LGBT people in Ireland. Actions include speaking out against homophobic language, emailing your TD about Marriage Equality or gender recognition for Trans people, talking to friends and family about LGBT rights, fundraising for LGBT campaigns, wearing their LGBT Ally wristband!

What has USI done for LGBT rights in Ireland?

USI has been at the forefront of LGBT campaigning in Ireland for many years.
USI was involved in the campaign for decriminalisation of homosexuality in 1993. USI continues to campaign and raise awareness on issues such as marriage equality, transgender rights, the MSM Blood Ban. USI was proud to play a large part in the March for Marriage last August. USI also runs Pink Training – a weekend of training on LGBT issues for LGBT students and allies.
Pink Training is the largest training event of its kind in Europe. USI is also a member of IGLYO (International Gay and Lesbian Youth Organisation).
[/tabgroup]

The USI Equality and Citizenship Officer for 2012-2013 is Laura Harmon.

Laura can be contacted at laura.harmon@usi.ie for any questions on the campaign